Home » All Products » Microsoft Surface Studio 2+ First Impressions: Pricey and Impressive
UP ABOVE THE WORLD

The Surface Studio 2+ has a compelling form factor for the working photographer, thanks to the innovative folding display and the ability to seamlessly transition from an upright display to a horizontal work surface. Still, the Surface Pro 9 may be the better fit for most. 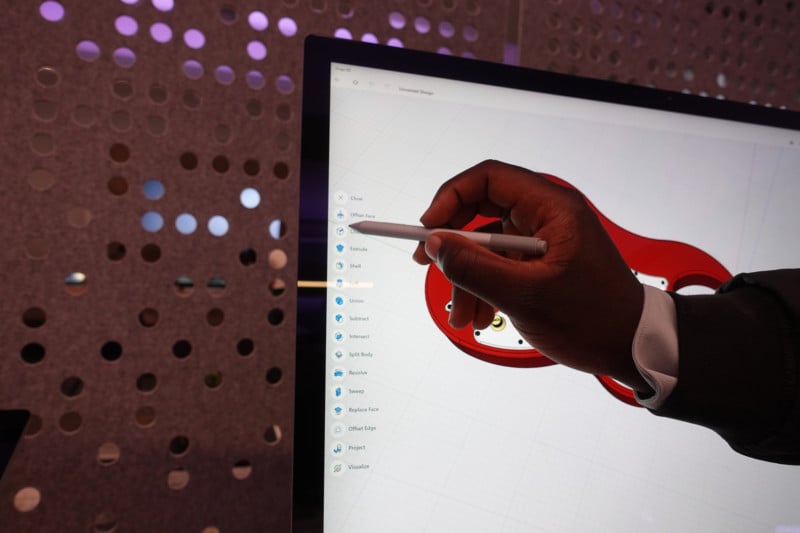 I had the opportunity to try all of the new devices at the launch. Yesterday we looked at the new Surface Pro 9, a tablet-based Windows 11 machine with a touchscreen interface and a folding keyboard.

The Surface Pro has upgraded to the 12th Gen Intel processor family. In contrast, the Surface Studio 2+ comes with the older 11th Gen processor, albeit with the added power of the NVIDIA 3060 GPU.

Even the name of the new Surface, the Surface Studio 2+, indicates that this is an incremental upgrade from the predecessor. The Microsoft representative I spoke with said that the “50% increase in speed” over the Surace Studio 2 means this model will likely stay in the lineup as long as the previous version.

Since the Surface Studio 2 was introduced in 2018, we could be at the beginning of a four-year run with this model.

With a product expected to last as long as a Presidential term, it would be nice to see some younger, more powerful technology behind the wheel.

That’s not to say that the Surface Studio 2+ isn’t a compelling product, thanks mainly to the NVIDIA graphics processor. Anyone that works on photos or videos knows that the video processor handles a large percentage of the workload in everyday work.

It’s just a choice that’s made odder by including the 12th Gen Intel chips in the laptops. It seems strange, considering it’s a $4,300 computer using the same 28-inch PixelSense screen and case of the previous generation.

In addition to the “new” Intel processor, the Studio 2+ now packs USB-C/Thunderbolt 4 ports and has Dolby Vision HDR. 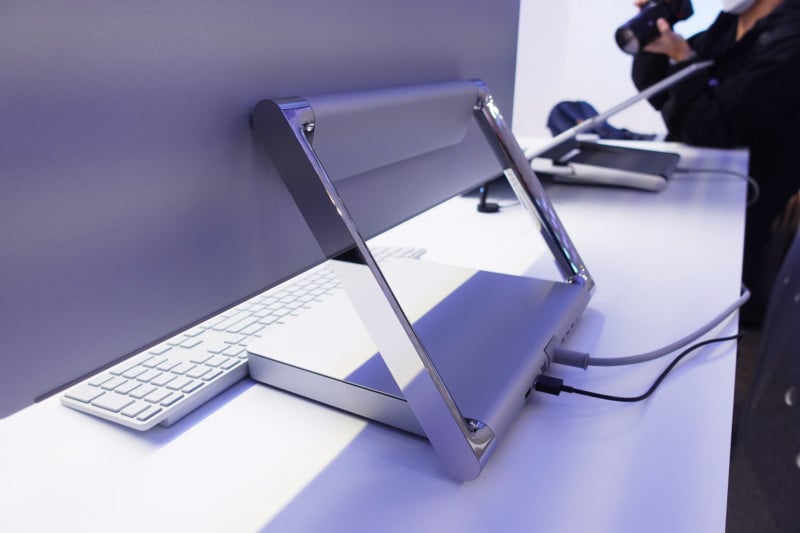 I am a big fan of the design of the Studio 2 and now the Studio 2+ housing, with some caveats. I like the pivoting hinge that moves the display from fully vertical to nearly horizontal. I like having my “canvas” lying flat to work on it. I like taking a pen and using it to make subtle changes in a Photoshop file or tweak a design in Illustrator.

There’s a saying in design that “form follows function,” which Microsoft seems to have heeded with the Surface 2+ and the Surface Pro 9—not having to hew to traditional designs allowed them to try new things. 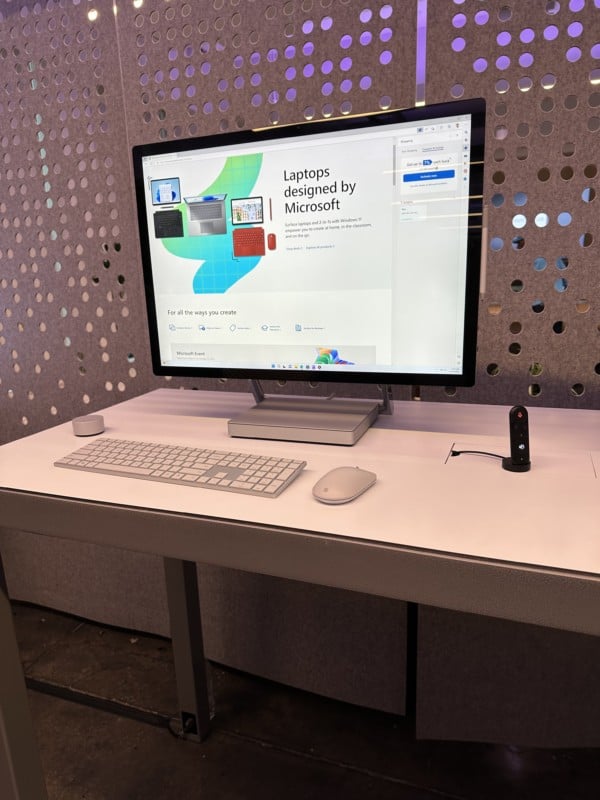 A minor point about the display on the Studio 2 and Studio 2+: I have a habit—a holdover from art school—of drawing or painting with an actual canvas so that the top is closer to my body and the bottom farther away.

This position accommodates the angle of my arm when drawing, so working on-axis with a system like the Studio 2+ takes my brain some adjustment time. I usually sit or stand with my body turned to the work area.

I have the same issue with the pen used by the Studio 2+ that I do with the Surface Pro 9: the tip is sometimes misregistered as touching the screen when the tip is still above it.

Since the Studio 2+ is running a full version of Windows, albeit one tailored for use as a tablet, I accidentally clicked unintended menu options while trying to perform tasks.

My time with the Surface Studio 2+ pen is limited. Working with a Wacom tablet often took adjustment, so I suspect I would get used to this quickly.

In another clever bit of engineering, the pen for the Surface Studio Pro 2+ can attach magnetically anywhere around the frame of the display. 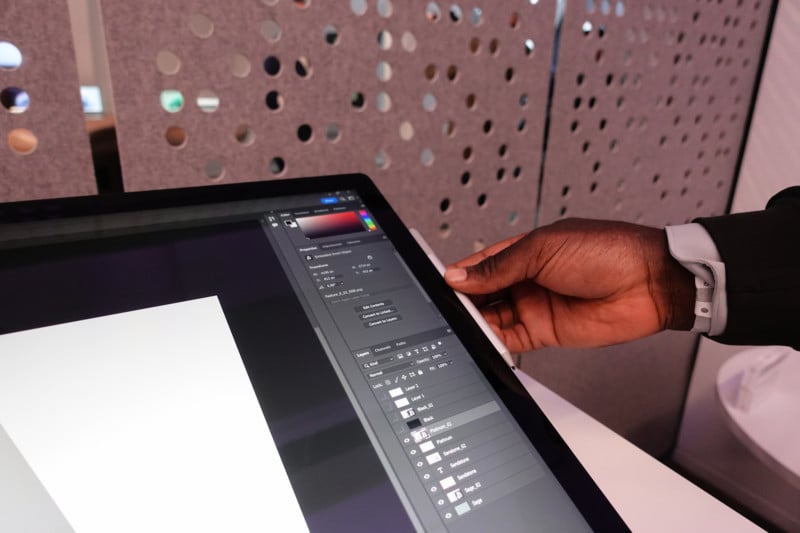 The system also works with a variety of Microsoft’s alternative input devices, such as control pucks and specialized mice.

Judging performance during the short hands-on session was challenging as there wasn’t much pre-loaded on the machines. Photoshop and 3D rendering software were installed by there wasn’t a selection of RAW files or other large assets to work with. The Microsoft rep I spoke with showed off the design of a guitar in 3D and how quickly changes could be made in the model. Not knowing how detailed the file is (as I’m not familiar with 3D), it was tough to judge the performance.

I did perform some Gaussian Blurs on the images on the machine, and they were instantaneous, but again, not the same as working with a large multi-layer Photoshop file. 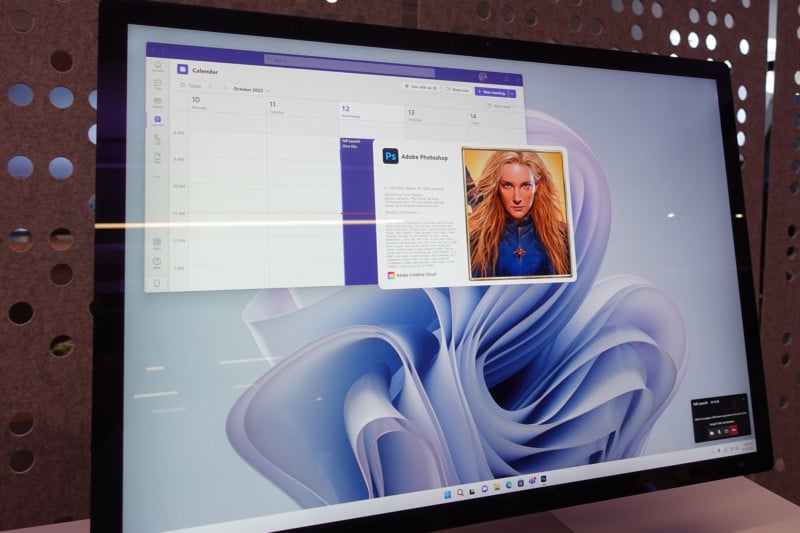 I’m looking forward to the chance to test this machine as I suspect the new NVIDIA GPU gives the Surface Studio 2+ a nice performance boost.

I was planning to write “a nice bang for the buck,” but this is hard to quantify with the Surface Studio 2+. $4500 is both the base and highest, as only one configuration is available. That price would be easier to swallow if the Surface 2+ had a complete upgrade to the current 12th Gen Intel chips.

The Mac Studio—the fastest desktop Mac available until a new high-end Mac Pro ships, is $4,000 in the beefiest configuration, which is a 20-Core CPU, 48-Core GPU, and 32-Core Neural Engine box that’s got 32GB of RAM and six total Thunderbolt 4 ports.

Of course, there’s no display that’s quite like the one on the Studio 2+, so the cost of the Microsoft Surface Studio line is mainly for that pivoting display and the ability to work on it as a horizontal surface. Wacom still makes the 27-inch Cintiq, a combo display and drawing Surface, but that’s $3,500 and isn’t the same as having the drawing surface as your primary display.

The Microsoft Surface Studio 2+ is an impressive machine from a design standpoint. It’s the only product on the market that successfully marries a tablet and a desktop at the scale it does.

It’s yet to be seen if the speed boost from the “new” Intel 11th Gen chipset and GPU is enough to justify the price tag for the photographer or if a solution with a high-end display and a graphics tablet would be as functional at a lower price.

Microsoft certainly did a great design job with the Surface Studio and the subsequent Studio 2 and Studio 2+. A level of panache makes it an impressive piece for an executive or an industrial design guru to justify the cost, even if it’s not the perfect machine for a photographer or videographer.